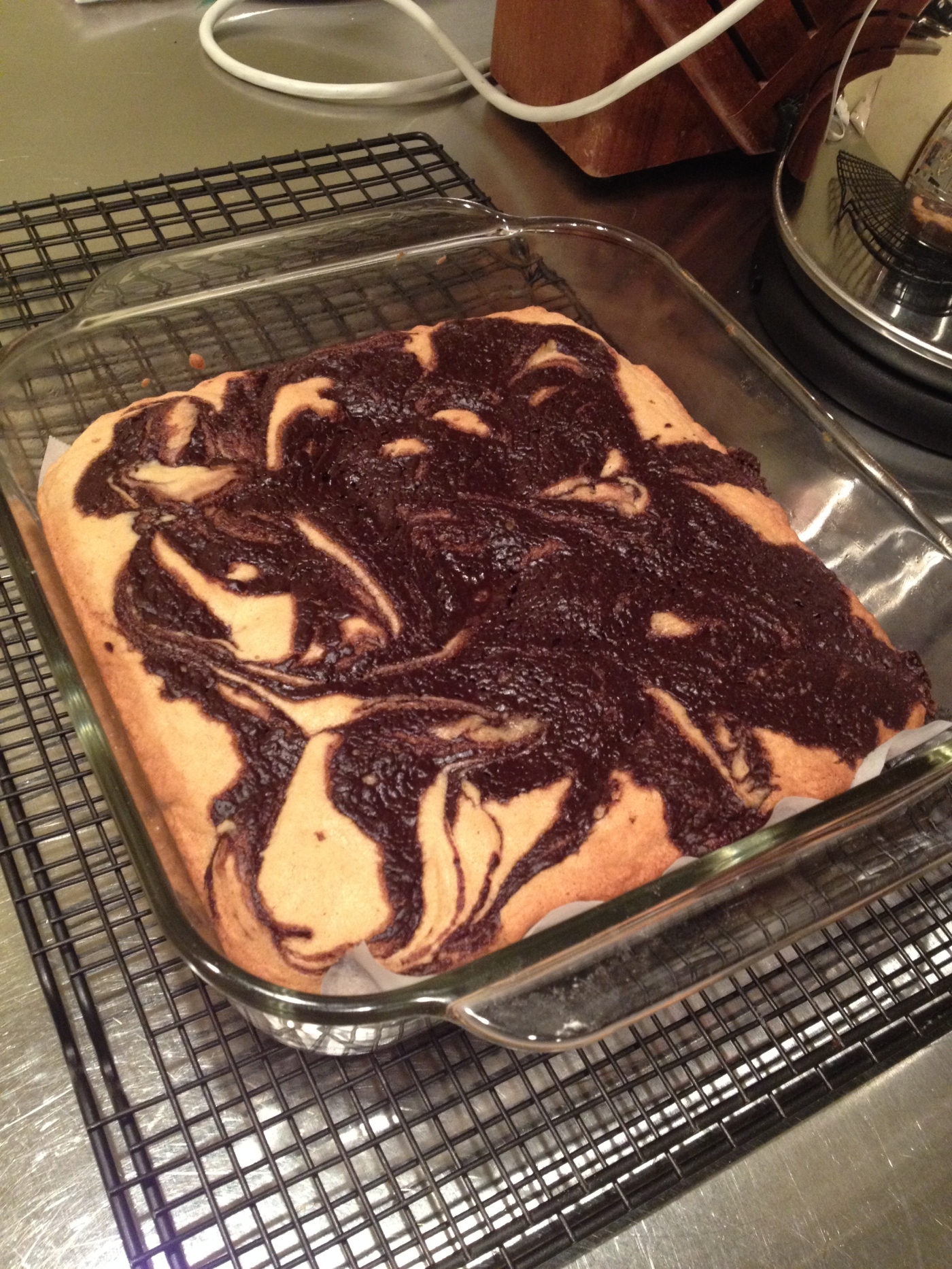 But when I stopped to think for a moment, I realized that I had in the refrigerator a little tub with leftover chocolate babka filling, and that, instead of using chocolate chips,  I should swirl the babka filling into the brownie batter. So I melted the chocolate filling in the microwave (because that stuff hardens to rock in the fridge) and poured it atop the brownie batter. My daughter watched me. “Mmmmmmmmm,” she said approvingly. “Yeah,” I said. “But you know what, this was dumb of me, I should have put half the batter in the pan, then put the chocolate, and then put the rest of the batter on top of the chocolate.” “Well who cares,” said the wise one. “I do,” I said, “but never mind, I can do it next time.”

I baked the pan of brownies and they came out…. fine, but not at all brownie-like. They were more like peanut butter cake, and rather dry peanut butter cake at that. We ate them, but none of us loved them. I was disappointed, but immediately grasped the problem. Too much flour, by 50%. “I will fix this,” I said to everyone, and everyone paid no attention at all.

The other day, having baked a lovely loaf of chocolate bread, I then returned to the peanut butter brownie problem, which sounds like it would be a really good episode of Peg + Cat, except probably peanuts aren’t allowed on PBS shows. This time, I revised the recipe, cutting the flour dramatically. So now it went like this:

1/3 cup butter (original recipe called for margarine, but get real)

You cream the peanut butter and butter together in a mixer and when it’s smooth you add the sugars. Then you add the eggs and vanilla. Whip it all up so it looks fluffy. In a separate little bowl, whisk together the dry ingredients and add them to the butter/sugar/eggs.

Prepare an 8×8″ baking pan by taking the wrapper from a stick of butter and lightly rubbing it on the bottom of the pan. Then make a sling of parchment paper and lightly coat the paper with butter, too. The grease on the wrapper will be enough to achieve this, you don’t need to slice any actual butter or get your hands messy to do this; you just need a microscopic film of butter on the pan and paper.

Put half the batter in the pan, then put most of your chocolate filling (or chocolate chips) over the batter. Cover the layer of chocolate with the rest of the peanut butter batter, then add the rest of the chocolate to form the top layer. Swirl with a knife until it looks however you think it looks best, then bake at 350° for about 30 minutes. I kept thinking 20 minutes would do the trick, but it didn’t, and I kept adding time, six minutes at a time, and I think I wound up at 30 minutes. Let cool a while in the pan (about 20 minutes) on a rack; then remove from pan using edges of parchment, and place the brownie, still on the paper, on the rack. It needs to cool all the way before removing the paper and slicing.

This peanut butter brownie is far superior to the one I made the first time around. “Much more chewy, peanut-buttery,” said one reviewer. “Mmmm, really good,” said another reviewer. It was felt that chocolate chips would be preferable chocolate element over the leftover babka filling, so when I work on this again, I’ll be doing it with chocolate chips.
However, there is an argument to be made for making babka again, and, again, making too much chocolate filling, and starting this vicious cycle all over again, because some of us like the chewy, rich, chocolate sludge…