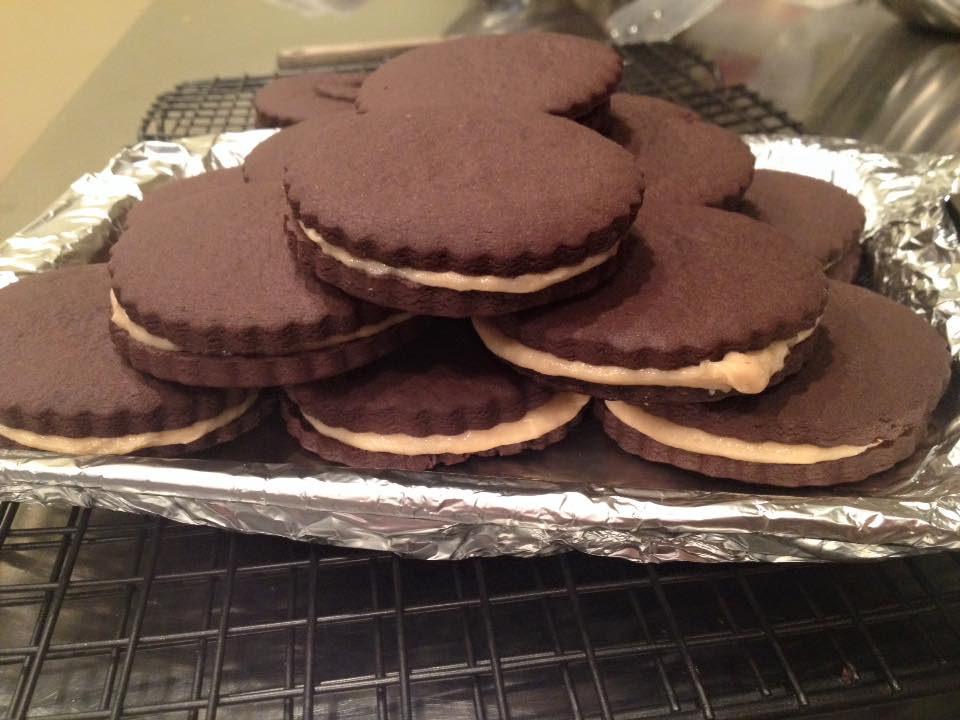 Oreos, I love you, but you may never be purchased again, not that I can even remember the last time I bought Oreos anyhow.

It is my mother’s birthday this week and I felt that it would be wise and nice to bring some baked thing when we go visit her. Since traveling with cake is a dicey prospect, I thought cookies would be the way to go. I don’t know why but the idea of a chocolate sandwich cookie, like an Oreo, but with peanut butter filling (because my mom likes peanut butter) sprang to mind. I voiced these thoughts to my husband, who said skeptically that it sounded “awfully experimental,” but I ignored him and plotted my next steps. Cracking Maida Heatter’s Book of Great Chocolate Desserts (which is a fabulous book, one of the first dessert-focused cookbooks I bought — in fact, I think it was the very first such book I bought), I found a recipe for chocolate wafers; grasping immediately that I had on hand everything it would take to make these, I moved forward. This is the list of ingredients:

So, naturally, the first thing I did was say, “Two ounces of unsweetened chocolate? Screw that, I’m using cocoa powder instead.”

But I otherwise did exactly as I was told. I preheated the oven to 400° and I lined cooky sheets with aluminum foil. I creamed the butter, added the sugar, threw in the vanilla and the egg, and then whisked all the dry ingredients together. I added the dry to the wet, mixed thoroughly, and cooed at the beautiful dark brown cooky dough (not that we’re told to do this explicitly, but it’s a totally natural reaction to such a beautiful dough). I then formed it into a brick, wrapped it in waxed paper, and put it in the fridge for not quite half an hour.

When the dough was chilled, but not hard as a rock, I took it out and referred back to Heatter’s instructions. She tells us to roll the dough out on a pastry cloth. Now, this may surprise you, but I had no idea what she was talking about. A pastry cloth? Do I own anything I can use as a pastry cloth? The answer of course was, “Yes.” A pastry cloth turns out to be a non-lint producing, flat-weave cloth you rub flour into and then use as your surface for rolling out dough; it makes it easy for you to move the prepared disc of dough onto your baking sheet. Apparently all pie bakers know this. Since I don’t really believe in pie, I’ve been ignorant, but now I’m converted.

My first thought was to use a particularly cute 1940s era dishtowel of mine as a pastry cloth — the weave is perfect — but I was leery of possibly staining it permanently with chocolate. So I took one of the old cloth diapers I use instead of cheesecloth and rubbed some flour onto it and then began to roll out the cooky dough. Then came the epiphany of the week: Rolled cookies should totally be rolled out on a pastry cloth. I don’t know why or how I never before grasped this, but it was awesome. The dough was so easy to work with; it didn’t stick; it rolled out in about two seconds to exactly the right thickness (1/8″) and was simple to remove from the cloth and put on the baking tray. Had I done this straight on the countertop, I’d’ve had to use so much more flour, and it would have been both messy and I’d’ve risked toughening the dough. It’s now clear to me that, were I a piecrust baker, I’d’ve already known about pastry cloth, but because I never make pie crusts, I had no clue. Well: now I know. And pastry cloth is my new hero.

(Incidentally: Because the very dark dough didn’t mark the cloth at all, not one bit, I’ve realized that I can in fact use my cute 1940s dishtowel as a pastry cloth, and I intend to dedicate it to this purpose from now on.)

So I rolled out the cookies and baked them. It doesn’t take long: 8 minutes, pausing at 4 minutes to rotate the trays of cookies (switching racks and rotating pans, necessary moves). Then you cool the cookies on a rack.

While the cookies cooled, I made the peanut butter filling. As it happened, I still had some leftover peanut butter sauce for ice cream sitting around, and so I felt perfectly confident that (despite the presence of corn syrup in the sauce) I could generate some peanut butter filling in about two seconds. Normally one would take peanut butter, some butter, and some confectioner’s sugar and just whizz that together. Today, I took some of the sauce, about a cup and a half of confectioner’s sugar, and a little bit of heavy cream (maybe 2 tablespoons) and whizzed that together. My husband tasted it and admitted grudgingly it was good. When the cookies were cool, I put some filling onto a cooky, glued another cooky onto it, and beheld my gorgeous creation. “Look at that!” I crowed to my husband. He came and looked and said, “Your mother will be very impressed,” he said, “but no one’s tasted them yet.”

“Oh ye of little faith,” I thought to myself, and placidly continued assembling the sandwich cookies. The last one, I thought, I will serve to my husband and child as a test cooky. I cut it in half — the cooky part shattered; it is a crisp cookie — and brought them to my family, who had varied reactions. My daughter declared them wonderful, with much enthusiasm and longing looks toward the tray of cookies to travel tomorrow. My husband, more restrained, admitted calmly, “They’re good.”