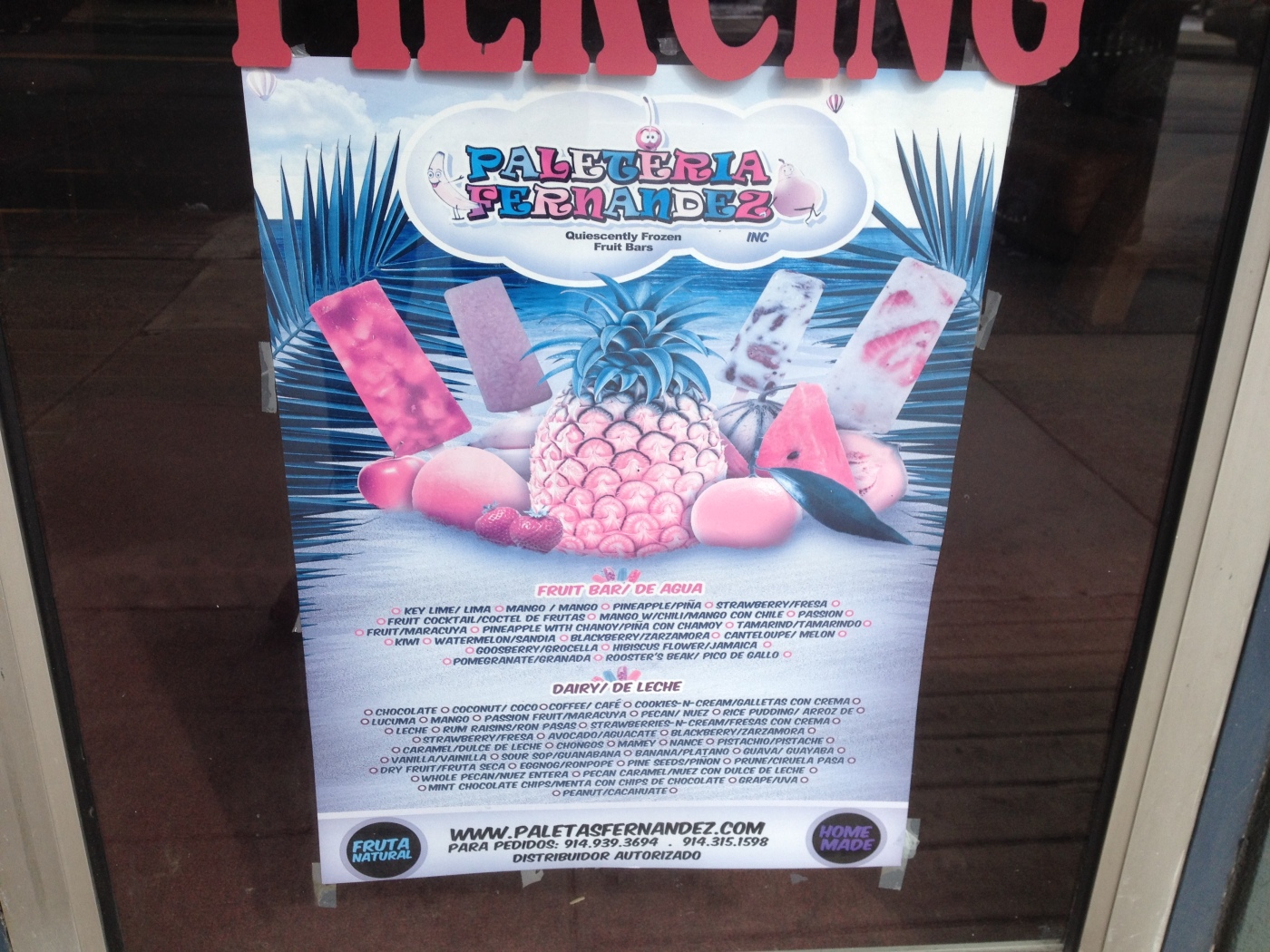 About a year and a half ago, I was made aware of the existence of something called a paleta, which is a Mexican popsicle. I was on a food tour of a neighborhood in town that’s the residential and cultural base of the Central and South American communities here, and we had stopped into a restaurant where, I was told, there was a freezer case of paletas. “They’re wonderful,” the guide advised us. I didn’t have time to sample one just then, but I made a mental note to go back and try one later. As luck would have it, I’ve not gotten back to that particular restaurant, but I’ve spent a lot of time wondering about paletas.

I spend a lot of time downtown at a place called The Institute Library, which is located on a somewhat rag-tag block of Chapel Street. Chapel Street is, like so many city streets, variable, block by block. Some sections are quite high-end, with shops catering to the Yale community, and some are, as the phrase goes, low-rent. The Institute Library, which has been in its unassuming building since the 1870s, is in what is currently a low-rent district (but rents are definitely going up). This distinguished and strange Library has been, for decades, surrounded by retail storefronts selling inexpensive goods to New Haveners who are decidedly not part of the Yale community. You can find beauty supplies, wigs, flashy jewelry, dollar store stuff. You can get a pair of Nikes, a pair of Chuck Taylors, bars of black soap. And right next door to the Library is a tattoo parlor. As the Hausfrau is not a big fan of tattoos, I’ve never been inside the tattoo parlor (though I’ve logged many hours in the beauty supply shops and the dollar stores). As I was walking to the Institute Library, I noticed suddenly that the tattoo parlor next door, of all places, had a sign in their window announcing that they had paletas for sale. “Well, isn’t that interesting,” I said to myself.

Then I found myself engaged in a long Facebook conversation with a friend who had also seen the sign and wanted to try one. She, like me, found it hilarious that the tattoo parlor was hawking popsicles.  What got me was that there were so many flavors. I wrote, “I want to try — I think the sign said there’s a caramel one. Also coconut. It’s like a Crayola crayon 64 pack list of flavors.” We had this conversation in February, when, frankly, eating popsicles was no one’s highest priority. But we stowed the information away for future reference.

Well, last week, the future came. L. and I made plans to meet downtown and scoop up a paleta or two. First we met at the English Building Market, a delightful shop selling various vintage items, mostly housewares, and I picked up an Ice-O-Matic there (more on that later). Then we went to the tattoo parlor.
The paletas are kept in a freezer case by the front window. Depending on the time of day, the way the light hits, you might not be able to see into the freezer case while standing on the street — glare can be a bitch. But you can read the sign in the window that lists all the flavors. L and I strode into the tattoo parlor with, really, no idea what we might be i

n for. Neither of us had ever been inside the tattoo parlor before. What we found was a very clean, orderly shop, with rows of chairs for people to wait in, like at a doctor’s office, and signs advising clients to please keep their children under control. Along the left wall was a long glass case displaying jewelry for sale, and we perused the selections while the woman working the desk (the owner, it turns out) helped a client. The jewelry was a surprise — I’d never known they had jewelry in there, and to be quite a honest, I rather liked a lot of it, and none that I saw at first glance had hideously high prices. I mean, I’m in the market for a new ring, and it may well come from there.
Once the clerk had finished her transaction, she turned to us and I said, “Hi, we’d like to buy a couple popsicles.” She came down from behind the desk and walked over to the case with us. She unlocked the case, and we scanned the case: What would be seriously good? What would just be a novelty item, worth a couple of bites but possibly not worth finishing? This was a MAJOR DECISION we were making. “I’m kind of leaning toward the rice pudding,” I said to L. She said, “That’s what I was thinking about, too,” she admitted. I said, “We should really get two different flavors. You get the rice pudding, I’ll get something else.”

Not all flavors are available at any given moment, it appears; of the ones I could see quickly — I didn’t want to waste too much of the clerk’s time — there were two contenders I could take seriously, one of them coconut, one of them an old favorite of mine, lime. Lime isn’t a very unusual popsicle flavor, but on the other hand, I find that I don’t see it around much these days. And I had a suspicion that if I got one of these lime popsicles, it would be exponentially more lime-y than whatever crap I’d be likely to get from an ice cream truck or in the ice cream novelties section at Stop and Shop.

We paid for the paletas and unwrapped them quickly. The clerk very sweetly handed us each a paper towel — she didn’t have to do that, it was very motherly and kind of her — and we thanked her and took our soon-to-be-messy paletas out in the street. We walked over to Pitkin Plaza, sat down at a cafe table, and talked and ate our popsicles.

L. declared hers weird but delicious. “The rice has a kind of chewy quality,” she said. I reported that the lime was sharp and sweet and just the right thing for a hot summer day. Sitting at the table, we ate the popsicles quickly — we had to — and discussed the oddity of going to a tattoo parlor downtown to buy popsicles. “Did you see you can get a rum raisin one?” L. asked me. I said, “Rum raisin is very mysterious.” “I don’t think they make rum raisin ice cream anymore,” L. said. “I never see it anywhere.” I told her that there’s a shop in my neighborhood that carries it, and explained my theory that they stock it for one elderly customer who lives nearby. “I think they keep just enough of it around to keep her happy, and then when it runs out, they order more. But it’s only for her.” “That sounds entirely plausible,” she said, nodding.

“This is just so New Haven, though,” L. observed. And she’s right. New Haven has all kinds of places that are, ostensibly, one thing, but then are beloved for some other thing entirely, or are known to have some specific product that you just can’t get anywhere else in town. Sure, there are pizza places that are pizza places and movie theaters that are movie theaters. But there have also been bars that were really places we went because the jukebox was so great. It wasn’t that the drinks were so great; it was that the jukebox was great, and the drinks were at least cheap enough that you didn’t mind if they were sort of badly mixed, because the jukebox was awesome. There are bars where you go because they have really good French fries. There is a felafel store where you can buy cheap pomegranate molasses and this brand of tea that is, otherwise somewhat hard to find, I am told. (This is Ahmad tea. I’m not a tea drinker, but my husband is; he got turned onto the stuff by a co-worker who gave him a tin of it as a gift. Hooked, he started ordering it online because he couldn’t find it in shops. Then it turned out that the felafel store around the corner sells it very affordably.) There’s the little Asian grocery store where, sure, you can pick up your sushi rice and your sweet soy sauce and your Pocky sticks, if that’s what floats your boat, but the real gold there is the bi bim bop, a big bowl of wonderful food for about five bucks. This is why it pays to keep your eyes open all the time. Jewels everywhere, if you’re willing to find them.

We left Pitkin Plaza and headed for Church Street: I had to catch a bus, and L. was going to head home. “I think I’m going to go make some rice pudding,” she said thoughtfully.

I like to wander around town with my daughter and take her into places like the grocery store with the secret bi bim bap and the felafel store with the hidden stash of pomegranate molasses and pickled turnips. I would never have guessed that it would be on my agenda to take my daughter to a tattoo parlor, but with popsicles as good as these for sale — $2.50 a pop — I see no reason why I shouldn’t take her there for a treat. We actually went by and peered into the freezer case through the window yesterday as we were walking to the Institute Library. “I’m gonna take you here soon, we’ll get a popsicle — think about what flavor you’ll want.” She said, very firmly, “I think blackberry.” We’ll see how many time she changes her mind once we’re in the store. But we’re definitely going. Maybe tomorrow. We had ice cream sundaes for lunch on Monday; ice cream sodas on Wednesday; today I taught her how to make an egg cream; next up, tattoo parlor paletas.

One thought on “You Don’t Need a Tattoo, but You Should Really Get a Paleta.”